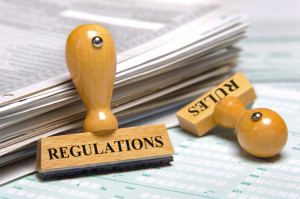 A recent GAO protest case,Compuline International, Inc.B-408379 found that the agency acted reasonably by rejecting the protestor’s proposal as non-responsive because it did not provide a management or staffing plan or key personnel; did not include required information for past performance references, and did not submit a cost proposal.

In addition, the proposal did not follow the format or organization required by the RFP, did not substantively address the topics identified in the RFP (or did not include sufficient detail), and instead addressed topics that the solicitation did not require.

Given that the protestor failed to adhere to the clear instructions in the RFP for proposal content, GAO found that the agency reasonably rejected the proposal as non-responsive. One piece of advice for bidders in government contracts is to consider having a suitable compliance matrix or an experienced government contracts attorney to review the bid for compliance.

Failure to comply with solicitation requirements can haunt both government and contractors.  When you are bidding on a federal project, you are responsible for understanding what the government wants to see in your response. You can only successfully meet his requirement if you understand and follow the evaluation criteria.

GAO has ruled in many protests that offeror risks having its proposal evaluated unfavorably where it fails to submit an adequately written proposal. See Recon Optical, Inc.,B-310436, B-310436.2, Dec. 27, 2007, 2008 CPD ¶ 10 at 6.  Who makes that determination? Is the determination reasonable.

These are questions that procurement laws leave in the hands of the Agency. As you can see although government contracting is lucrative, there are many pitfalls and landmines that come from various angles.  Simply put, if your proposal fails to comply with the material requirements of the solicitation, it may be rejected as unacceptable.

The lesson here is two-fold. First, when responding to a government proposal, you should create a compliance matrix and checklist. This minimizes the risk of failure to follow the criteria.

Second (for agencies) -Bid protests are sustained when the government fails to comply with solicitation requirements and follow the evaluation criteria.

In order to prevail in a protest, you really have to articulate what the solicitation stated; how you met the requirements and evaluation criteria; and the agency simply failed to adhere to its own evaluation terms.

The most difficult part is that many contractors may allege disputes in the bid protest letter. However, unless they have a bid protest attorney on board, they cannot get access to the Protective Order.  With such access, you simply cannot prove your case.

For further questions concerning GAO bid protests and your decision to file a government contract protest. Call a GAO protest lawyer at Watson & Associates at 1-866-601-5518.

2 comments on “GAO Protest Failure to Comply With Solicitation Requirements”